Never has the old adage of “a game of two halves” been more appropriate. Saturday at Stamford Bridge gave onlookers as many questions as it did answers about the Chelsea way under Frank Lampard. For Sheffield United connections this felt like a coming of age performance in the Premier League. The game had a stark contrast in terms of who was in control between both halves of football, throwing up some very noticeable trends in tactical, mental and team structure facets. Let’s take a look at some of the key tactical aspects both sides displayed.

Under Lampard Chelsea have looked to engage the opposition deep in their own 3rd when possession is turned over, it’s an approach Lampard bought to his Derby County side last season too. It’s part of his clear philosophy that his forwards and advanced midfielders be aggressive at not only engaging with the ball but looking to block off easy passing lanes. 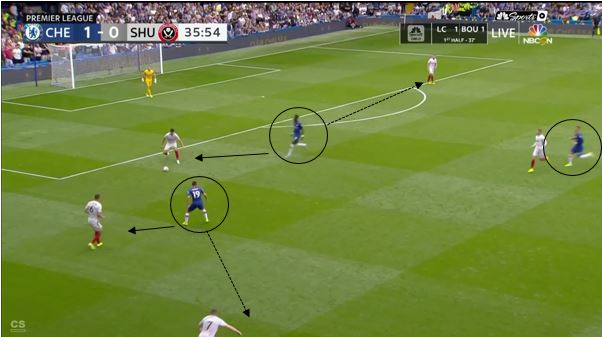 The image above shows this in full effect. Sheffield United Centre back, John Egan, has the ball and is looking for a forward pass. Abraham can engage the man in possession while blocking off the passing lane out wide left. Mason Mount also highlighted blocks off the easy get out pass to the right sided centre back, while simultaneously blocking off the passing lane to the central midfielder who has presented an option wide right. Ross Barkley is then backing up those 2 by pinning down the main central midfield target for the Blades, Oli Norwood.

This press forced Sheffield United to not go more direct (the Blades can go direct fine) but to play much harder passes to much less controllable and retrievable areas, i.e. Up to Callum Robinson or Oli McBurnie who lacked support.

The Blades 1st half pass map above shows the nature of their play, having to play lots of passes from much deeper areas and not having much sustained play in key attacking areas. This map also goes some way to telling the story of how the Sheffield United wing backs, so vital to their attacking outlet, struggled to get forward or to get possession as high and as often as they need to. Enda Stevens, in particular, is a key outlet for the Blades at LWB and his ability to be involved high into the opposition final 3rd was non-existent in the 1st half (as per below image). 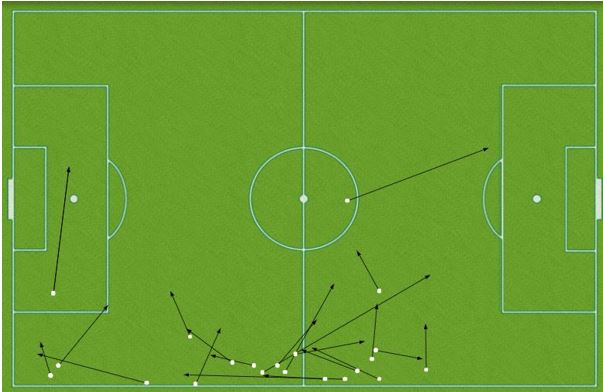 The midfield battle also followed the story of the game with Chelsea controlling large parts of the first half in sustained attacking areas. One of the keys to this was their ability to find their advanced No 8 type midfielders, Barkley and Kovacic, between the lines of the Sheffield United structure.

This image is just one of a few examples of how fluid and advanced the Chelsea CMs (except Jorginho) are tasked to be. The size and strength of Abraham makes him a great CF to play up to and get 3rd man midfield runners in behind him, often meaning an advanced no 8 takes up a CF role as play develops to receive through balls. In the image above Kovacic has made the run beyond Abraham and is able to burst through in a 1 v 1. The interesting aspect is how the opposite “no 8” sits behind the play to either recycle possession or stifle counter attacks. 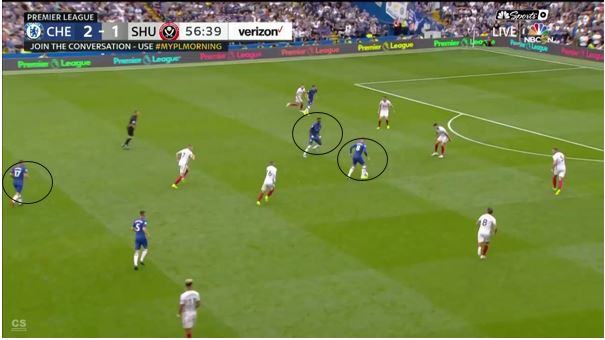 Again in the image above the clear setup of advanced No 8 alongside or beyond the CF. The other No 8 sitting deep behind the play, the CF dropped off slightly between the MF and DF lines. Chelsea were very good at recreating this situation in the 1st half on Saturday, often causing the Sheffield Utd backline to question whether they push out or stay deep.

Chelsea’s 1st half pass map shows how much their game plan consisted of controlled possession in deep to mid areas then more direct, vertical passes to and in the final 3rd. Naturally, lots of passes cutting in from the left due to Mason Mount being inverted and a fair amount of passes in and around the zone 14 area just outside the box. 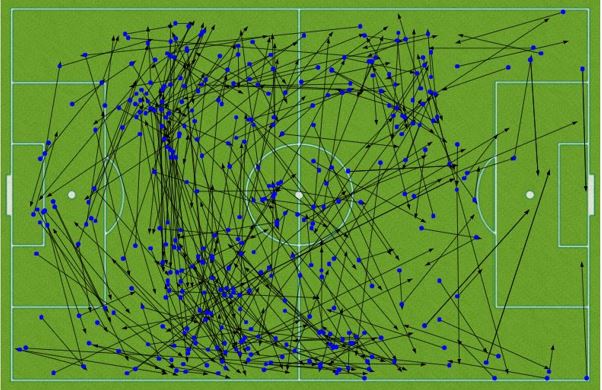 Chelsea were much the better side in the 1st half, however their inability to deal with wide attacking play in terms of the spaces being attacked by the Blades and the subsequent crosses that came in was apparent. Both full backs for Chelsea were extremely poor defensively, allowing runners to go beyond them with ease.

Here we show George Baldock, the Blades RWB, and Emerson the Chelsea left back. In this image the situation looks fairly in control however the next image shows this play rolled on a few seconds.

Highlighting the same two players you can clearly see how Baldock was able to run off the back of Emerson, not be tracked and receive in a dangerous, deep area able to cross into the box unchallenged.

It was no surprise that the goal and general threat of the Blades came from wide. The build up to the 1st Sheffield United goal is a prime example of how they attacked Chelsea’s full backs and targeted them specifically as weak links. 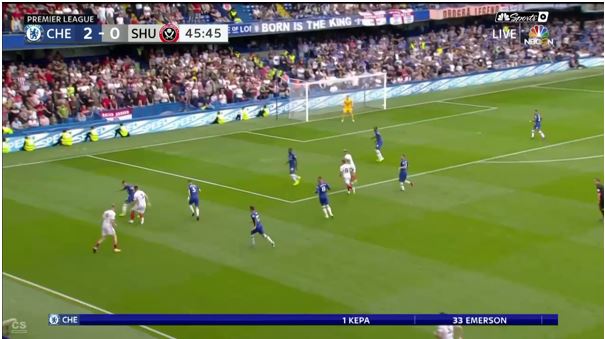 In this first image in the build up to the equaliser there appears no direct threat. The wing back is engaged by the Chelsea right back (also has midfield cover) and the box is clear and well covered by the Chelsea backline.

5 seconds later Enda Stevens, the brilliantly under rated LWB, has beaten Azpilicueta and is looking to either cut the ball back or whip a ball across the face of the goal. Even at this stage the danger isn’t clear as Chelsea look to be in decent defensive positions, however the lack of awareness of the Chelsea CBs, in particular Tomori, is clear as the ball from Stevens eventually gets cut back to Callum Robinson highlighted. Tomori’s focus on the ball allows Robinson to back off and create a yard of space with which he can receive the pass and take the shot. Naturally due to the wing back and overlapping CB system the Blades use, wide play and crossing is a key strength of the way they build play, but it was particularly evident, especially second half with how much the Blades targeted the Chelsea right hand side. The below images shows the Blades passes and crosses into the Chelsea penalty area. Notice the left hand side dominance for United.

Chelsea’s full backs struggled consistently with runners beyond them who they needed to track, channel runs from the forwards and the wing backs attacking them directly.

Sheffield United – What changed in the 2nd half?

Chris Wilder alluded to the fact the Sheffield United players were playing with a lack of belief in the first half. Once he had a chance to gather and compose his players’ thoughts, the Blades were a different entity after half time but what in particular did they do so well to gain control of the game in the 2nd half?

Under Chris Wilder the Blades are a team that play high and deep into opposition areas. This could leave them vulnerable when they turn possession over. The antidote to this, is to press to win the ball back or aggressively block passing lanes, in the 2nd half this is exactly what Sheffield United did.

The image above shows how the United midfield pressed higher and more aggressively than in the 1st half, the forwards engaged the Chelsea CBs, the central midfielders got closer to their counterparts, making passes harder and more risky. The Blades forced more long switches of play just like in the above example.

The Blades have forced a switch of play which has been executed poorly. This has allowed Luke Freeman, one of 3 United CMs, to press the Chelsea right back very aggressively and force a turnover in a dangerous area.

Another example here shows yet more aggressive pressing by the Blades and in particular again Luke Freeman. This time the LWB has pushed up high onto Willian. Freeman can then engage the player in possession while blocking the passing lane to the Chelsea CM. This press, and resulting pressurised passing from Chelsea defenders is born out in the numbers, Chelsea completed 63% of long passes in the 1st half compared to only 43% in the 2nd half.

This isn’t something Sheffield United only did in this game, under Wilder and this unique system the Blades have mastered the art of playing high and ensuring they start possessions high to by recovering or recycling the ball high up the pitch as the below graph from @AshwinRaman_ shows: 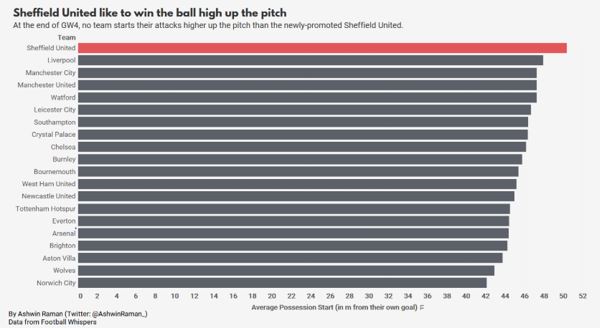 I mentioned above how the Blades looked to isolate the Chelsea full backs at all opportunities and their attacking threat in the 2nd half certainly proved that. Here is the Blades passes attempted map for the 2nd half only:

Notice the much higher density of passes in high, wide areas. Due to their much higher and aggressive defensive line and press the Blades were able to gain possessions and build attacking play in much more threatening spaces. Couple of examples are shown below of how engaging the overlapping CBs, or simply targeting the Chelsea wide defensive areas gave the away side the success and confidence to get back into the game.

The above shows Chris Basham, the Blades RCB, very high up the pitch from open play and drifting into a right wing space. As the RWB has possession of the ball the draws the Chelsea line up. The ball is then simply clipped in behind the Chelsea line with on-rushing midfielders and Basham in space to run onto and deliver a cross. This is both an example of the bravery Sheffield United showed in trusting their system but also the quite inept defending in wide areas Chelsea showed.

Another fine example of the unique Sheffield United system in this snapshot above, the wide RCB, Chris Basham is the target of a sweeping switch of play, he is both high and touchline tight in a RWB/advanced RB area. The interesting aspect comes when you see George Baldock, the Blades RWB, inverted into a right hand inside channel space normally occupied a forward or number 10. United carry out this play a lot, it gives an immediate positional overload in a key area on the pitch and isolates opposition full backs into making a snap decision on who is best to engage. 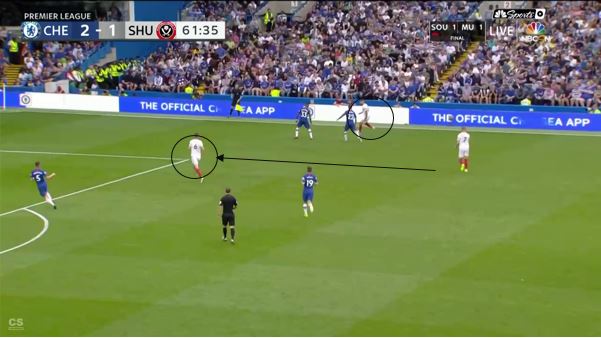 Same again in the above image but this time roles reversed as the RCB, Basham, has inverted into a CF type space, Baldock has managed to drag 2 Chelsea players over to him and yet again the Blades have a spare man.

This targeted approach to attack down the sides of Chelsea, along with playing higher up allowed Sheffield United to grow into the game and eventually equalise, which came created via a cross from a wide left position.

An interesting and exciting game, Chelsea dominated the shots and chance quality but the second half showed that using more belief, being more aggressive and playing smarter Sheffield United found a way to turn the game in their favour.